Alas, the Forgotten Landscape Community Archaeology Course has now finished. Why not read all about the course and what we got up to below.

If you're interested in starting a Community Archaeology group, or are already in one and would like to know what GGAT could do for you and your group, please contact us at enquiries@ggat.org.uk, or keep a look out on our Community Archaeology page for more information about future projects.
Paul Huckfield
GGAT Outreach Officer
Posted by GGAT at 11:23 No comments:

Dennis Hopkins of the Community Archaeology Group has put together two images of what the Hills Pit complex may have looked like whilst it was in use. Enjoy 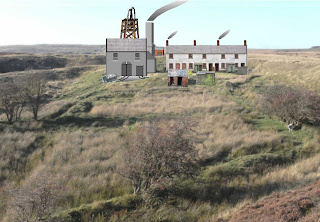 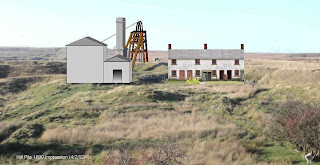 I made a temporary web page with links to three J. van Laun photos of the powder house here: http://www.dchopkins.co.uk/misc.htm. Also there's a composite of 2011 and 1978 photos to compare the stone arrangement in the wall. The copies of the 1978 photos were taken (with permission) on my camera, so they're not the best quality.

I didn't find new information/photos on Hill Pits at Pontypool Museum. The librarian suggested that the colliery owner was the most likely to have taken photos, but they don't seem to be with the Blaenavon Company records deposited in Gwent Records Office, which Mike has searched.

Following on from Keith's research at Blaenavon Museum, I compared the 3 photos of the Powder Magazine taken in 1978 by John van Laun with current photos. From the stone arrangements I'm sure it's the same building - surprising because so much has gone (slate roof, 1 gable end, surrounding boundary walls).

The museum has a collection of wheels, tramroad parts and tools found at Hill Pits in 1978.

Session 9:The end is coming

On Thursday 24th November Paul (GGAT Outreach Officer) displayed the template posters in which the group's Hill Pit text will be included.

Andy had carried out some research into the electoral registers at Newport library and established that the Hill Pit cottages/houses were inhabited until 1961.

Keith discovered three photographs at the museum which proved the existence of a magazine in the Hill Pit area. It was in reasonable condition with a tiled and pitched roof. It was also surrounded by a high stone wall. Dennis subsequently carried out further research into this and believed that the magazine was, in fact what we now know as the 'powder house'.

Mike was to visit the Rifleman's pub to investigate a link with the Dando family, who was reputed to have lived in the cottages until more recent times.. We believe you Mike!!
Keith
Posted by GGAT at 19:39 No comments:

I was at Newport Library yesterday and went through the old voters registers (Electoral Roles).

Hills Pit Cottages were actually occupied until 1961, (not the mid fifties as we thought), but the name changes by this time to Hills Pit Houses.

It may have been that these houses had become social housing as only Walter and Emily Matthews had been resident in 1958. Any long term occupants seem to have moved out by the mid fifties and may have been condemned at that point as the turn over of occupants is quite rapid.

I have details of occupants at roughly five year intervals going back to 1925, (not every year, although the records are there obviously), if we want to attempt to track some of them.

Hi Paul,
I have been back on the National Library for Wales website to check about the author 'Shane Kelleher'. I thought he wrote a book, but it turns out it was an article for 'Archaeology in Wales' back in 2009. However, after searching the internet - spending hours typing in different combinations, giving the length of the article heading (Identifying, remembering and restoring forgotten landscapes, recent archaeological work at and around Blaenavon World Hertiage Site). I finally typed in ‘historic landscape Blaenavon Shane Kelleher’ and the second one down, Forgotten Landscapes Project Landscape Conservation Action Plan -and the first thing that appeared beneath the above was Shane Kelleher's name, so I am presuming he actually helped in planning the project from the start?

I have also typed in Archaeology in Wales 2009 and the Dyfed Archaeology Trust website comes up, so does Birmingham University with a tag page for Wales, but as yet I have still had no luck in finding his article, unless it was contained within the article that Andrew brought in last Thursday. 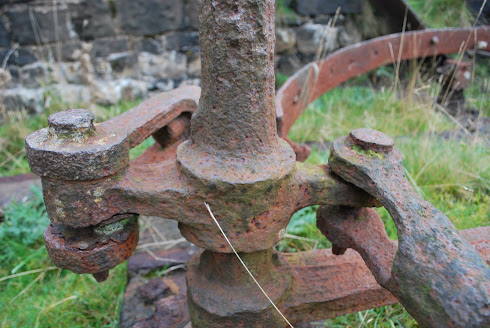